Well, what a turnaround from last week.  We've gone from feeling like we lost last week, to feeling like we've already won the Web Ellis cup, all thanks to an epic performance against Australia yesterday.  Tri-Nations champions and a lot of people's real pick to win the world cup, and they were completely dominated by us.  Worra day!  Even personality-free-zone O'Gara was practically in tears afterwards.  Onwards and upwards now - Russia and Italy still to go and if we top the group, we're looking at a much easier proposition in the quarter-finals than if we qualified second.  Things are looking up.

It was a bit of an upsy-downy day for sport, though.  Yesterday afternoon we took ourselves off to the RDS for Leinster V Glasgow Warriors, buoyed up by our win.  Unfortunately, the wheels kind of came off the wagon and we were beaten 23 - 19 in the end.  Not exactly a routing, though, and it's early days in the season yet.

Anyway, today's recipe is total comfort food - perfect for this time of year when the evenings are getting that bit shorter.

1. In a large bowl, mix the buttermilk, celery, onion, garlic, chili, a teaspoon each of the paprika & cayenne and plenty of salt & pepper.  Add the chicken, toss to coat, then cover and leave to marinate in the fridge for as long as you have - overnight if possible.

2. In a large, shallow dish, mix the flour with the rest of the paprika & cayenne and more salt & pepper.  Remove the chicken from the milk with a tongs, shake off any excess liquid and dredge through the seasoned flour until completely covered - give it a good shove with the tongs to make sure you get into all the nooks & crannies.

3.  Heat a couple of inches of sunflower oil (don't use olive, it's too strong and with too low a smoke-point) in a large, deep pan until piping hot.  Fry the chicken two pieces at a time, allowing about 6 minutes per side.  Handle very carefully when removing from the pan so that you don't knock off all your lovely, crispy coating.  Leave to rest on a warmed platter lined with kitchen towels while you're cooking the other two pieces. 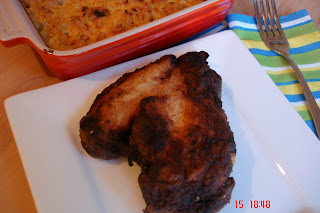 This chicken is absolutely perfect served with:

1. Cook the pasta until just slightly underdone & drain.  In the same pot, make a roux by melting the butter, then adding the flour and cooking for a good 5 minutes, stirring frequently.

2. In  a jug or bowl, mix the milk, cayenne, chili powder, hot sauce, garlic granules and salt & pepper.  Whisk into the roux a little at a time, then bring to the boil, stirring constantly, until the sauce thickens.  Remove from the heat and stir in the cheese.

3. Stir the pasta back into the sauce (add a little of the cooking water if your sauce is too thick), pour into a shallow dish & bake in an oven preheated to 200C until golden & bubbling.  Serve with the chicken and a leafy green salad. 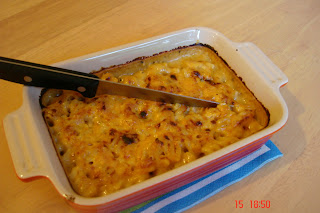 I know we've discussed my addiction to spicy food already, so if you're afraid that this is going to be too hot for you, feel free to reduce the quantities of hot sauce, chili & cayenne.  You could even omit them altogether, but where's the fun in that?
Posted by Eimear at 20:23

Eimear
Rugby-loving, book-loving, food-obsessed, highly disorganised home cook who's somehow managed to convince herself that people want to read what she has to say... Enjoy!